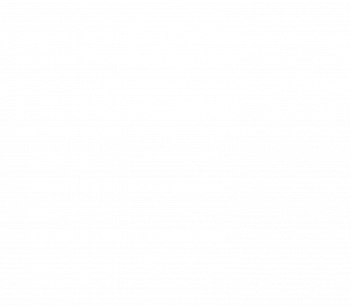 On 27 June 2018, The China Africa Advisory’s China Representative, Hannah Ryder, moderated a panel discussion at the Global Bamboo and Rattan Congress in Beijing, China, which focused on cooperation between China and African countries on bamboo and rattan and specific benefits for women from these non-timber forest products. 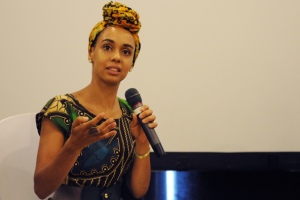 Bamboo, the fast-growing grass plant, and rattan, the spiky climbing palm, spread across countries in the tropical belt. Millions of rural communities across Africa, Asia and Latin America already use bamboo and rattan as a source of fuel, food, handicrafts and even housing. Because they are easy to process, without the need for investment or heavy machinery, these plants can be used by women in the home, as a clean-burning source of fuel and a vital means of income. 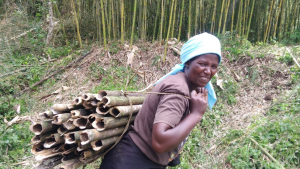 These plants have transformed many people’s lives. A number of women report having an increased social standing, as a result of setting up bamboo-related business. Speaking at the Congress, Gloria Adu, a Ghanaian entrepreneur and founder of a successful bamboo charcoal business, said, “Bamboo has done so much in my life. It has changed me completely. I’m so happy we now have women in the industry in my country.” 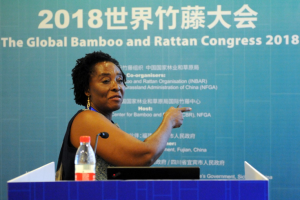 As panelists in the session highlighted, there are a number of issues which prevent more women from taking up bamboo- and rattan-related industries. High on the agenda is a lack of training, which prevents women from creating more value-added products. Equally important was the need for greater technology transfer. As Dancilla Mukakamari, the Rwanda National Coordinator for the Africa Women’s Network for Sustainable Development, REFADD, said: “What we need from South-South Cooperation? We need technology transfer. A lot of our products need to be improved. If we have technology, if we have knowledge, we can do a lot of things – because women are working in all parts of the value chain.”

Over the last few decades, China has played an outsized role in sharing its expertise and bamboo and rattan processing technologies with countries around the world. Since 1997, the International Bamboo and Rattan Organisation (INBAR) has worked with various Chinese ministries to train about 24,000 people around the world in all aspects of the non-timber forest product value chain: from planting and harvesting to production creation and marketing.

The reason why is clear. As a country with a bamboo and rattan sector valued at $30 billion, which employs almost 10 million people, China is an example of what non-timber forest products can do for livelihoods. Bamboo and rattan are a high-priority part of the government’s South-South cooperation: in 2017, the President of China Xi Jinping wrote a letter in support of bamboo development; and in a message read out at the Congress, Premier of the State Council Li Keqiang confirmed that China “[is] willing to work with the international community to promote the sustainable development of global bamboo and rattan industry, and make a positive contribution to deepening South-South cooperation, implementing the 2030 Agenda for Sustainable Development and bringing about a clean and beautiful world.” 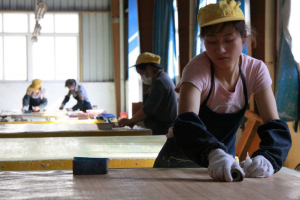 With a bamboo and rattan sector valued at $30 billion, China is now exporting its expertise abroad

One former trainee is Congress panellist Gloria Adu, who attended an INBAR-led workshop in 2001. During the course of the workshop, which she described as an “eye opener”, Ms Adu learned about several diverse types and uses of bamboo, and was taken on several tours to see bamboo plantations and arts and crafts in different parts of the country. Following training, Ms Adu was inspired to set up her own industry. Global Bamboo Products Ltd. now owns a 300-hectare bamboo plantation in Ghana and has gone on to train an estimated 400 people in alternative livelihood activities, as well as some 10,000 farmers in the cultivation, management, and primary processing of bamboo and bamboo charcoal.

As well as training courses, which transfer knowledge and expertise, the Chinese government is increasingly using trilateral cooperation as a means to help African countries realise the potential of their native plants. The Dutch-Sino-East Africa Programme, led by INBAR, is applying the expertise of the Dutch and Chinese bamboo sectors to Ethiopia, Kenya and Uganda: countries with plentiful bamboo resources, but a relatively underdeveloped market. The project has so far shared everything from bamboo charcoal making kilns, to Chinese remote sensing technologies, to help these countries better understand what resources they have, and how to use them sustainably.

At the Global Bamboo and Rattan Congress, another new project was announced. The programme, which is financed by the International Fund for Agricultural Development project, will use technologies and experience from China to scale up the bamboo sector in four countries: Cameroon, Ethiopia, Ghana and Madagascar. The direct beneficiaries will be at least 30,000 rural smallholder farmers and community members, particularly women and youth, who will be taught about how to plant, manage and create value-added products, including charcoal, using bamboo.

In a world with an increasing focus on ‘nature-based’ solutions, and where large international projects such as China’s Belt and Road Initiative are pledging to be environmentally responsible, bamboo and rattan could play an outsized role, according to INBAR Director General Hans Friederich. “Like China, many countries in Africa have abundant bamboo and rattan resources, and a rich history and culture of using them. Now we are seeing Sino-African relations work to harness these plants for job creation, climate change mitigation and green growth – transforming this traditional ‘poor man’s timber’ into green gold.” 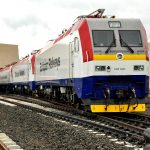 Our FOCAC Interview with Beijing Review (in German)Interview
X